MIAMI, September 23, 2013 – Royal Caribbean International cut the first piece of steel today for its third Oasis-class ship, marking the first construction milestone for a vessel that, at approximately 227,700 GRT, will be the world’s largest and most innovative cruise ship. Royal Caribbean Cruises, Ltd.’s Chairman and Chief Executive Officer, Richard D. Fain and Royal Caribbean International President and CEO, Adam Goldstein together with Laurent Castaing, chief executive officer, STX France, attended the event at the STX shipyard in Saint-Nazaire, France, where the ship will be built. The cruise line’s third Oasis-class ship is expected to be delivered in mid-2016.

“The Oasis-class ships have fundamentally changed the cruising landscape with the cornucopia of amenities and innovations that can be found onboard,” said Fain. “We are delighted to be offering a third Oasis-class vessel for our guests as well as to be back at STX France after such a long tradition of building amazing ships together.”

“We are excited to once again partner with Royal Caribbean International,” said Castaing, “We have built 12 ships for Royal Caribbean and are extremely proud of the strength of our relationship. Oasis 3 is one of the biggest challenges ever undertaken in the history of our company and our teams are excited and ready to make this a successful project.”

Oasis 3 joins sister-ships Oasis of the Seas and Allure of the Seas which took the cruise industry by storm with their introduction in 2009 and 2010, respectively, featuring a revolutionary design with a split superstructure and the cruise line’s neighborhood concept of seven distinct themed areas.  At 225,282 GRT and spanning 16 decks with 2,700 staterooms, the Oasis class ships also introduced extraordinary “firsts” at sea such as an 82 foot-long zip line, a handcrafted carousel, the Rising Tide elevating bar, the AquaTheater high-diving performance venue, and the Central Park with more than 12,000 live trees and plants.  The Oasis class also offers amenities that can only be found on Royal Caribbean, such as twin FlowRider surf simulators, cantilevered whirlpools, an ice-skating rink, the H2O Zone kids aquapark, and the Royal Promenade, an interior boulevard that stretches nearly the length of the ship and flanked by restaurants, lounges and boutiques, among many others.

“Our Oasis-class ships have led the charge in delivering the WOW for which Royal Caribbean is known,” said Goldstein. “We are delighted to get the building process underway and look forward to the next chapter of this amazing class of ships.”

Oasis of the Seas and Allure of the Seas sail weekly, alternating seven-night Eastern and Western Caribbean itineraries, from Port Everglades in Fort Lauderdale, Fla. In October 2014, Oasis of the Seas will sail a short autumn season in Europe from Barcelona, Spain before entering drydock for routine maintenance at the Képpel Verolme shipyard in Rotterdam, The Netherlands.

Details of the third Oasis-class ship will be revealed in the coming months.

Royal Caribbean International is an award-winning global cruise brand with a 40-year legacy of innovation and introducing industry “firsts” never before seen at sea.  The cruise line features an expansive and unmatched array of features and amenities only found on Royal Caribbean including, jaw-dropping, Broadway-style entertainment and industry-acclaimed programming that appeals to families and adventurous vacationers alike. Owned by Royal Caribbean Cruises Ltd. (NYSE/OSE: RCL), the cruise line sails 21 of the world’s most innovative cruise ships to the most popular destinations in the Caribbean, Europe, Alaska, South America, the Far East, and Australia and New Zealand. World renowned for its friendly and engaging Gold Anchor Service, delivered by every staff and crew member, Royal Caribbean has been voted “Best Cruise Line Overall” for 10 consecutive years in the Travel Weekly Reader’s Choice Awards. 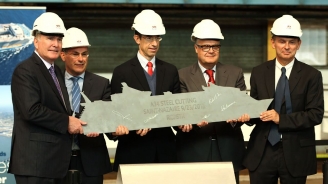 Construction Begins on World's Largest Ship: Royal Caribbean Marks Steel Cutting Milestone for Oasis 3
Royal Caribbean International celebrates the steel cutting for its third Oasis-class ship, the first construction milestone for a vessel that will be the world's largest cruise ship when she debuts in 2016. 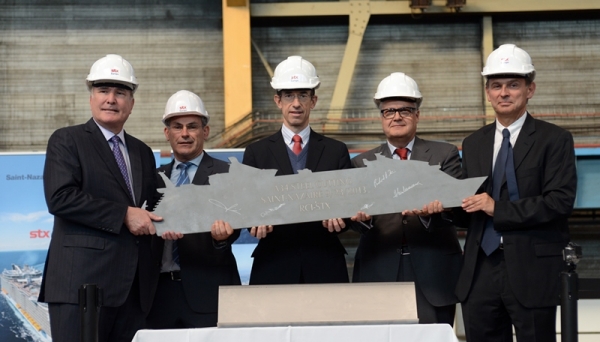