BOATLOADS OF BANDWIDTH: A NEW WOW FOR OASIS AND ALLURE

MIAMI, March 21, 2014 – Forget the days of no signals and slow signals. Get ready for high speed on the high seas. A major technology investment by Royal Caribbean International gives guests aboard Oasis of the Seas and Allure of the Seas more wireless capacity than every other cruise ship in the world combined.  And the Wi-Fi will blaze at speeds that match or exceed what guests can achieve on land.

By pairing a new generation of medium-Earth-orbit satellites (originally designed to bring the Internet to emerging markets like sub Saharan Africa) with sophisticated antenna arrays aboard its newest ships, the popular ships are vaulting competitors and delivering guests the kind of technology they expect in a connected world.

“Vacations aren’t just about getting away from it all for modern families anymore,” said Adam Goldstein, President & CEO, Royal Caribbean International. “A great vacation today also means keeping friends updated over social media, and enjoying downtime with streaming content played on tablets and phones, not just movies on TV in your stateroom.

“But matching or exceeding the best on-land service was a tough challenge when the nearest cell tower or cable hook-up was 1,000 miles away. That meant we needed some real breakthroughs, not just incremental increases,” Goldstein said.  “But real breakthroughs are what we do. And once we cracked the download code, we also got to dream up some pretty interesting new uses for all that connectivity. Our ships go to incredible places – and this makes getting there even more incredible.”

A set of new, custom-built antennae were shipped from Israel to Florida last month, and installed on Oasis of the Seas. Testing confirmed the ships’ ability to match the fastest broadband connections on shore.  “O3b, our satellite communications partner, calls it ‘fiber speed with satellite reach,’ and this is exactly the result we are seeing in our tests,” said Bill Martin, Chief Information Officer, Royal Caribbean Cruises Ltd.

According to Martin, the key to unlocking a land-like experience was reducing satellite latency – the time it takes for something to happen after you hit ‘enter.’ This breakthrough technology solves that problem, reducing latency from 750 milliseconds to approximately 140 milliseconds. And with each ship’s overall capacity exceeding 500mbps during system tests, there will be more than enough bandwidth to go around.

Said Goldstein, “If you’re a first-time guest on one of these ships, you won’t realize how much work it took to make the wireless so pervasive – or that your cell ‘tower’ is 4,900 miles over your head. If you are a return guest, you’ll be blown away by the improvement. It’s that dramatic.”

For the first time, he said, it will be feasible for a guest to download streaming video or post video clips to Facebook.  The company is developing new pricing plans for added service.

And by the time the new system becomes available on Royal Caribbean’s newest ship, the upcoming Quantum of the Seas, Goldstein said guests can anticipate several new, show-stopper uses of the bandwidth.

What surprises? That information, he said, is not yet available for download.

Royal Caribbean International is an award-winning global cruise brand with a 40-year legacy of innovation and introducing industry “firsts” never before seen at sea.  The cruise line features an expansive and unmatched array of features and amenities only found on Royal Caribbean including, jaw-dropping, Broadway-style entertainment and industry-acclaimed programming that appeals to families and adventurous vacationers alike.

Owned by Royal Caribbean Cruises Ltd. (NYSE/OSE: RCL), the cruise line sails 21 of the world’s most innovative cruise ships to the most popular destinations in the Caribbean, Europe, Alaska, South America, the Far East, and Australia and New Zealand. World renowned for its friendly and engaging Gold Anchor Service, delivered by every staff and crew member, Royal Caribbean has been voted “Best Cruise Line Overall” for 11 consecutive years in the Travel Weekly Reader’s Choice Awards. 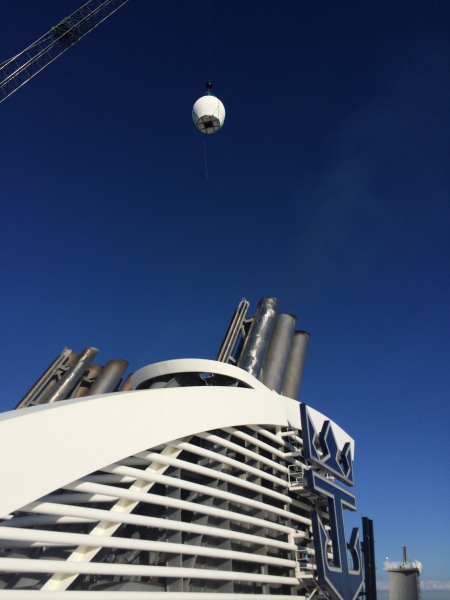