Quantum of the Seas Introduces the World's Most Advanced Lineup of Shows, Productions and Events

Royal Caribbean International’s newest ship, Quantum of the Seas, is poised to make a show-stopping debut in November 2014, with a lineup of entertainment offerings that push the envelope far beyond imagination. From stage shows that take guests on a highly visual and experiential journey of music, sound and performance, to a radically new form of multidimensional entertainment that seamlessly fuses technology with highly trained live performers, stunning visuals and special effects, Quantum of the Seas delivers an array of first of their kind productions and performances that will leave audiences spellbound.

“The level of ingenuity, creativity and sheer imagination that has gone into the creation of the entertainment onboard Quantum of the Seas is staggering,” said Lisa Lutoff-Perlo, Executive Vice President, Operations, Royal Caribbean International. “We are taking a quantum leap in all aspects of ship design and programming with the Quantum class, but the entertainment is especially remarkable. These shows and productions are truly one-of-a-kind, and we are confident that our guests will be WOWed.”

The Intersection of Entertainment and Technology

Already one of the most anticipated spaces onboard Quantum of the Seas, Two70° is the stage for a futuristic approach to entertainment that pairs the most advanced technology with brilliant dancers, singers, aerialists and musicians to deliver a powerful lineup of shows and events that have never before been seen on land, let alone at sea.

At the forefront of Two70° is Vistarama, an awe-inspiring innovation engineered especially for Quantum class. Vistarama transforms its expansive floor-to-ceiling windows into any scene, real or imagined, by combining 18 projectors to create an ambient surface over 100 feet wide and over 20 feet tall. Across this expanse, impromptu digital shows come to life in stunning 12K resolution, a pixel-perfect industry first. In addition, Two70°’s troupe of six agile Roboscreens stage surprise performances throughout every cruise. Each measuring over seven feet high and controlled by powerful robotic arms, the Roboscreens are delightfully nimble, as they create scenes while soaring and twisting solo, or uniting as one. The creative possibilities of Vistarama and Roboscreens are brought to life through the beautiful, imaginative and original digital content created exclusively for Royal Caribbean by Moment Factory, the internationally renowned studio in Montreal, Quebec, Canada.

“The entertainment in Two70° is simply magical,” said Nick Weir, Vice President, Entertainment, Royal Caribbean International. “There is an incredible team of risk takers and dreamers here at Royal Caribbean. Together, we saw the magnitude of what this room could do and shot for the stars. We’ve always brought the best of land to sea, but in Two70° we are creating something that has never been done anywhere else in the world.”

The integration of Vistarama and Roboscreens, with highly trained live performers, music and special effects,  provides an endless landscape for Royal Caribbean to create stunningly visual, first-of-their-kind shows that can only be seen on Quantum of the Seas.  Main shows include:

Continuing to expand on Royal Caribbean’s commitment to offering award-winning Broadway productions at sea, the Royal Theater also will host the full theatrical version of the smash hit musical MAMMA MIA! Guests will delight in this sunny, funny tale of love, laughter and friendship, all set to the timeless songs of ABBA – including “Dancing Queen,” “The Winner Takes It All,” “Money, Money, Money” and “Take a Chance on Me.”

Live Music at Its Best

Designed specifically with the music lover in mind, Music Hall is the hottest live music venue onboard Quantum of the Seas and the ultimate place for guests to enjoy intimate and exclusive access to live performances.  Music Hall comes alive at night as the heart of the ship’s entertainment, featuring bands, musicians, DJs, theme night parties and more, including:

With a variety of productions, events and parties to experience throughout a sailing onboard Quantum of the Seas, guests are encouraged to reserve the shows they wish to attend prior to their cruise through Royal Caribbean’s all-new Cruise Planner.  All shows are complimentary and included in the cost of a guest’s cruise fare.

The groundbreaking Quantum-class ships, Quantum of the Seas and sister-ship Anthem of the Seas will introduce a new set of first-at-sea onboard experiences, such as Ripcord by iFLY, a heart-pounding skydiving experience; North Star, a thrilling adventure that transports guests more than 300 feet in the air on a breathtaking journey; cutting-edge transformative venues including SeaPlex, the largest indoor sports and entertainment complex at sea with bumper cars, roller skating and more; and the cruise line’s largest and most advanced staterooms ever.  Guests also will enjoy the new Quantum-class Dynamic Dining, a completely new culinary experience that offers a landscape of 18 restaurant concepts as vast and varied as dining in the world’s most cosmopolitan cities, including specialty restaurants created with partner-chefs Jamie Oliver, Devin Alexander and Michael Schwartz.

The Quantum Class spans 18 decks, encompasses 167,800 gross registered tons, carries 4,180 guests at double occupancy and features 2,090 staterooms. Quantum of the Seas will sail out of New York Harbor from her homeport of Cape Liberty for her inaugural season before departing to her new homeport of Shanghai (Baoshan), China. Anthem of the Seas will debut in Southampton, U.K. in April 2015 sailing Mediterranean itineraries. More information on Quantum class is available at www.RoyalCaribbean.com/QuantumoftheSeas. Media can find more details, images and videos at http://bit.ly/1o6Poyj.

Royal Caribbean International is an award-winning global cruise brand with a 45-year legacy of innovation and introducing industry “firsts” never before seen at sea.  The cruise line features an expansive and unmatched array of features and amenities only found on Royal Caribbean including, jaw-dropping, Broadway-style entertainment and industry-acclaimed programming that appeals to families and adventurous vacationers alike. Owned by Royal Caribbean Cruises Ltd. (NYSE/OSE: RCL), the cruise line sails 21 of the world’s most innovative cruise ships to the most popular destinations in Bermuda and the Caribbean, Europe, Alaska, South America, the Far East, and Australia and New Zealand. World renowned for its friendly and engaging Gold Anchor Service, delivered by every staff and crew member, Royal Caribbean has been voted “Best Cruise Line Overall” for 11 consecutive years in the Travel Weekly Readers Choice Awards. 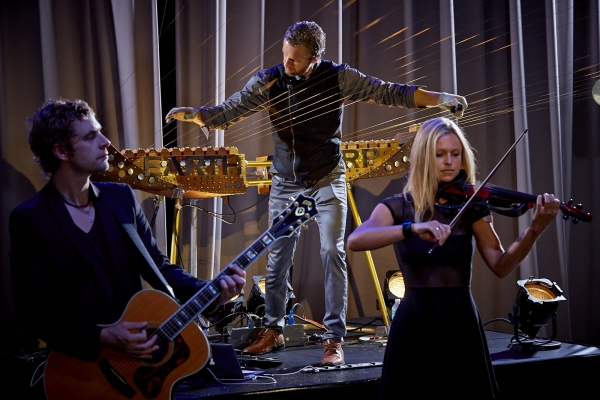 Musician and innovator William Close demonstrates his Earth Harp that will be featured in Sonic Odyssey onboard Quantum of the Seas along with a variety of other one-of-a-kind majestic instruments including a unique Drum Wall consisting of 136 drums, a Vocal Percussion Jacket, Violin Dress and more. 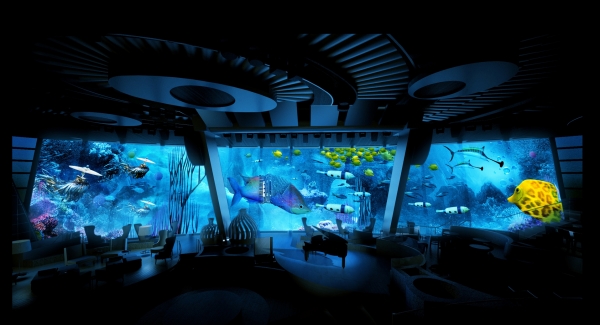