MIAMI, March 12, 2015 – Whether climbing La Sagrada Familia’s Nativity Towers for an unbelievable view of Barcelona, or dog-sledding atop Mendenhall Glacier for a once-in-a lifetime perspective of the Alaskan wilderness, vacationers will find unforgettable adventures with Royal Caribbean International. The award-winning cruise line today announced new 2016 Europe vacations, totaling eight of the region’s most innovative cruise ships that will sail from six European homeports and call at 80 intriguing destinations in 27 countries throughout the Mediterranean, Canary Islands, Scandinavia and the Baltic. Four of the Europe ships will be new to the region, and Royal Caribbean’s most-anticipated, third Oasis-class ship, Harmony of the Seas, will sail its inaugural season from Barcelona, while Independence of the Seas returns to Southampton as the U.K.’s largest and most favorite cruise ship. Perfect for family travel in Alaska, Explorer of the Seas will make history as the largest cruise ship to ever sail the region, and join Radiance of the Seas for the cruise line’s 27th consecutive season in the Great Frontier. Royal Caribbean’s 2016 Europe itineraries will open for booking starting March 19, 2015, and 2016 Alaska will open on March 26.

As part of all the new deployment openings, Royal Caribbean is announcing a new early booking BOGO50 offer. Vacationers can save 50 percent on the cruise fare of a second guest in the same stateroom with a full-fare guest, when making a new booking aboard sailings departing on or after May 15, 2015. Vacationers also can enjoy additional 50 percent savings on the fare of a third and fourth guest on nearly all 2016-17 itineraries, including the recently opened 2016-17 Caribbean itineraries. Additionally, guests can take advantage of the offer’s buy-one-get-one-half-off the second Premium Beverage Package by noting promo code ‘BOGOBEV,’ and complete their new booking with 50 percent reduced deposits. For more information about BOGO50, please visit www.Royalcaribbean.com/BOGO50.

BOGO50 is valid for new bookings, made between March 11 and April 30, 2015, in Oceanview and higher-category staterooms on five-night or longer itineraries. The offer does not include bookings on Quantum of the Seas, Anthem of the Seas, Ovation of the Seas, Harmony of the Seas, and trans-Atlantic, trans-Pacific, and China sailings.

Italy and Greece Adventures from Venice and Rome

Vacationers also can choose a wide range of trans-Atlantic cruises, which bookend each ship’s 2016 Europe season and combine Europe and the Caribbean on 13- to 16-night itineraries aboard the aforementioned ships. For their part, Explorer of the Seas and Radiance of the Seas will reposition to Australia, via Hawaii.

Royal Caribbean International is an award-winning global cruise brand with a 45-year legacy of innovation and introducing industry “firsts” never before seen at sea.  The cruise line features an expansive and unmatched array of features and amenities only found on Royal Caribbean including, jaw-dropping, Broadway-style entertainment and industry-acclaimed programming that appeals to families and adventurous vacationers alike. Onboard, guests are catered to with the cruise line’s world-renowned friendly and engaging Gold Anchor Service by every staff and crew member. Royal Caribbean has been voted “Best Cruise Line Overall” for 12 consecutive years in the Travel Weekly Readers Choice Awards and “Top Large-Ship Cruise Line for Families” in Travel + Leisure’s 2013 and 2014 World’s Best Awards readers’ survey.

Owned by Royal Caribbean Cruises Ltd. (NYSE/OSE: RCL), the cruise line sails 22 of the world’s most innovative cruise ships to the most popular destinations in Bermuda and the Caribbean, Europe, Canada and New England, Alaska, South America, Asia, and Australia and New Zealand. Media can stay up-to-date by following @RoyalCaribPR on Twitter, and visiting RoyalCaribbeanPressCenter.com. For additional information or to make reservations, vacationers should call their travel agent; visit RoyalCaribbean.com; or call (800) ROYAL-CARIBBEAN. 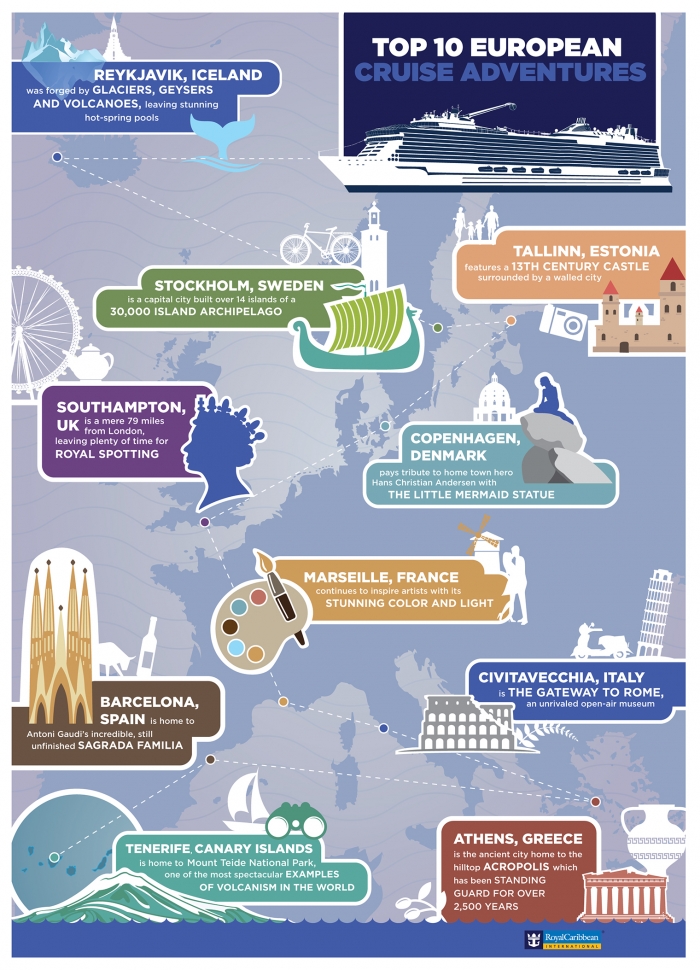