THE THRILLS ARE MULTIPLYING: GREASE TO HEADLINE ON ROYAL CARIBBEAN'S HARMONY OF THE SEAS AND INDEPENDENCE OF THE SEAS

MIAMI, Dec. 1, 2015 – Rydell High is heading to Royal Caribbean International! The first cruise line to feature fully licensed, Tony Award-winning Broadway productions today announced that Broadway’s hit musical Grease will take the stage onboard Harmony of the Seas, the most anticipated addition to the fleet yet, sailing across Europe as of May 2016, and Independence of the Seas, Europe’s beloved ship that returns to her homeport in Southampton, England for the summer.  The all-new, never-before-seen stage production, specially adapted by Royal Caribbean Productions, will boast a soundtrack of crowd favorites such as “Summer Nights,” “Greased Lightnin’,” “Look at Me, I’m Sandra Dee,” “Born to Hand-Jive,” “Beauty School Dropout” and more.

“Grease is a show that speaks to families of all ages and is sure to get guests out of their seats, singing and dancing, which is why we made the unprecedented decision to have it debut on Harmony andpremiere it onboard Independence immediately, starting in July,” said Nick Weir, Vice President, Entertainment, Royal Caribbean International. “As the first cruise line to bring Broadway performances onboard its ships, it’s only fitting that we would also be the first to bring Grease to the hospitality industry.”

In Grease, Sandy Dumbrowski, the new girl in town, and Danny Zuko, the school’s coolest greaser, have a secret summertime romance – but when they return to school, everything is different. Sandy attempts to navigate tricky Rydell High School social waters and catch Danny’s attention again, but Danny is chiefly concerned with maintaining his tough-guy reputation. In the end, the Pink Ladies help Sandy figure out how to win back the leader of the T-Birds.

As part of Royal Caribbean’s award-winning Broadway offerings, guests of the cruise line can take in performances featuring the greatest hits of legendary rock group Queen with We Will Rock You on Anthem of the Seas; the storytelling of ABBA’s timeless songs in MAMMA MIA! on Allure of the Seas; one of the world’s most beloved musicals CATS on Oasis of the Seas; the toe-tapping disco beats of Saturday Night Fever on Liberty of the Seas, and now, Grease on Harmony of the Seas and Independence of the Seas.

Harmony of the Seas combines the best of Royal Caribbean’s trendsetting innovations, entertainment and service – all designed to surprise guests again and again. From sliding down to the tallest slide at sea, to exploring exciting new destinations, to dining on the most imaginative cuisine at sea – Harmony will put guests at the helm of an unexpected adventure like no other. Harmony of the Seas is not a cruise ship – it’s a blow-your-mind, can’t-believe-this-is-all-in-one-ship floating adventure, waiting for guests to come seek.

Harmony of the Seas is the world’s largest cruise ship with a bold and unexpected lineup of thrilling experiences found nowhere else on land or at sea. Harmony combines the distinct seven-neighborhood concept that sister ships Oasis of the Seas and Allure of the Seas are known for, with some of the most modern and groundbreaking amenities including imaginative dining, unparalleled entertainment and the latest technology, including VOOM, the fastest internet at sea. From the Ultimate Abyss, a thrilling 10-story tall slide, to unparalleled entertainment including Broadway’s hit musical Grease and high-diving, acrobatic performances in the ship’s iconic AquaTheater, world-class dining in venues ranging from Jamie’s Italian Cuisine by celebrity chef Jamie Oliver to Wonderland, a unique whimsical culinary adventure for the senses; and robot bartenders, there is an adventure for guests of all ages onboard Harmony.

Royal Caribbean International is an award-winning global cruise brand with a 46-year legacy of innovation and introducing industry “firsts” never before seen at sea.  The cruise line features an expansive and unmatched array of features and amenities only found on Royal Caribbean including, jaw-dropping, Broadway-style entertainment and industry-acclaimed programming that appeals to families and adventurous vacationers alike. Onboard, guests are catered to with the cruise line’s world-renowned friendly and engaging Gold Anchor Service by every staff and crew member. Royal Caribbean has been voted “Best Cruise Line Overall” for 12 consecutive years in the Travel Weekly Readers Choice Awards.

The cruise line sails 23 of the world’s most innovative cruise ships to the most popular destinations in Bermuda and the Caribbean, Europe, Canada and New England, Alaska, South America, Asia, and Australia and New Zealand. Media can stay up-to-date by following @RoyalCaribPR on Twitter, and visiting RoyalCaribbeanPressCenter.com. For additional information or to make reservations, vacationers should call their travel agent; visit RoyalCaribbean.com; or call (800) ROYAL-CARIBBEAN. 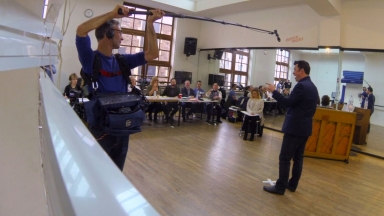