MIAMI, January 12, 2016 – Royal Caribbean International’s newest and hottest ship yet, Harmony of the Seas – sailing to Europe’s most popular destinations in the Western Mediterranean, beginning May 2016 – is setting the stage for an entertainmentensemble unlike anything ever seen before in one place. The innovative global cruise line is pulling back the curtain on the unexpected entertainment offerings that come together onboard Harmony of the Seas – from the hot summer nights of Broadway’s hit musical Grease, to high-tech, high-definition ice shows in Studio B and jaw-dropping, high-flying, immersive performances at the oceanfront AquaTheater, and, for the first time, Puzzle Break, an interactive, problem solving group activity, is in a dedicated, fully-produced space, fit for a Hollywood studio where guests are challenged to Escape the Rubicon, andso much more.

“We are taking entertainment to the next level on Harmony of the Seas with more captivating, immersive entertainment experiences than ever before,” said Nick Weir, Vice President, Entertainment, Royal Caribbean International. “The level of innovation that has gone into our latest lineup is truly mind blowing, and Harmony guests can expect the unexpected with our biggest, most awe-inspiring stage yet.”

The Biggest Curtain Call Yet

The main theater onboard Harmony of the Seas, the Royal Theater, is a spectacular, state-of-the-art space that enlists 21st century technology to create a performance environment that supersedes traditional theaters. Seating 1,380 guests, the Royal Theater is home to two headline shows presented by Royal Caribbean Productions:

Grease – the all-new, never-before-seen stage production, specially adapted by Royal Caribbean Productions, will boast original choreography, costumes and aerial elements set to amaze the most seasoned theater goers.  Featuring a soundtrack of crowd favorites such as “Summer Nights,” “Greased Lightnin’,” “Look at Me, I’m Sandra Dee,” “Born to Hand-Jive,” “Beauty School Dropout” and more, guests will follow the romantic twists and turns of Sandy and Danny as they navigate the tricky social waters of Rydell High School while keeping their reputations – and relationship – together.

The theatrical possibilities of the AquaTheater, the distinct high diving, acrobatic performance space introduced by Royal Caribbean with the Oasis class of ships, are pushed to breathtaking new limits onboard Harmony of the Seas.  New aerial capabilities will elevate the thrilling entertainment repertoire, creating an all-encompassing theatrical experience where the audience will witness heart-stopping balancing tricks on the highline and aerial maneuvers by acro-artists allowing them to dip into the audience and catapult back to the stage.  Two 10-meter high platforms and the hydraulic-floored pool, the largest and deepest freshwater pool at sea, below will serve as podiums for high-diving, hair-raising aerobatics that AquaTheater audiences have come to love.  The signature venue will boast the caliber of shows only presented on a Royal Caribbean stage, where innovations intermingle with emotions to defy the imagination. New AquaTheater shows include:

A Futuristic Spin on the Ice

Ice shows leap into the future on Harmony of the Seas, where world-class skaters perform extraordinary skills as stunning multimedia visuals, audio and state-of-the-art technology provide a sight and sound theatrical extravaganza.  Guests will watch as the surface of the ice rink in Studio B transforms before their very eyes, creating a backdrop of ultra-high definition video, which blends fantasy with reality. The result is a dazzling new canvas on which incredible artists demonstrate their unbelievable skills. New Studio B performances include:

On Harmony of the Seas, Royal Caribbean favorites are back and better than ever, including:

On the Royal Promenade, Harmony of the Seas continues the tradition of Royal Caribbean’s signature theme nights and parades with:

Guests on Harmony of the Seas also can belt out tunes atthe On Air Club, revel in a symphony of brass brilliance with the High Cs Horns, Harmony’s very own horn-led, nine piece orchestra, and take in livecomedy and music at Harmony’s brand new nighttime hotspot, The Attic.

Harmony of the Seas is the world’s largest cruise ship with a bold and unexpected lineup of thrilling experiences found nowhere else on land or at sea. Harmony combines the distinct seven-neighborhood concept that sister ships Oasis of the Seas and Allure of the Seas are known for, with some of the most modern and groundbreaking amenities including imaginative dining, unparalleled entertainment and the latest technology, including VOOM, the fastest internet at sea. From the Ultimate Abyss, a thrilling 10-story tall slide, to unparalleled entertainment including Broadway’s hit musical Grease and high-diving, acrobatic performances in the ship’s iconic AquaTheater, world-class dining in venues ranging from Jamie’s Italian Cuisine by celebrity chef Jamie Oliver to Wonderland, a unique whimsical culinary adventure for the senses; and robot bartenders, there is an adventure for guests of all ages onboard Harmony.

Royal Caribbean International is an award-winning global cruise brand with a 46-year legacy of innovation and introducing industry “firsts” never before seen at sea.  The cruise line features an expansive and unmatched array of features and amenities only found on Royal Caribbean including, jaw-dropping, Broadway-style entertainment and industry-acclaimed programming that appeals to families and adventurous vacationers alike. Onboard, guests are catered to with the cruise line’s world-renowned friendly and engaging Gold Anchor Service by every staff and crew member. Royal Caribbean has been voted “Best Cruise Line Overall” for 13 consecutive years in the Travel Weekly Readers Choice Awards.

The cruise line sails 23 of the world’s most innovative cruise ships to the most popular destinations in Bermuda and the Caribbean, Europe, Canada and New England, Alaska, South America, Asia, and Australia and New Zealand. Media can stay up-to-date by following @RoyalCaribPR on Twitter, and visiting RoyalCaribbeanPressCenter.com. For additional information or to make reservations, vacationers should call their travel agent; visit RoyalCaribbean.com; or call (800) ROYAL-CARIBBEAN. 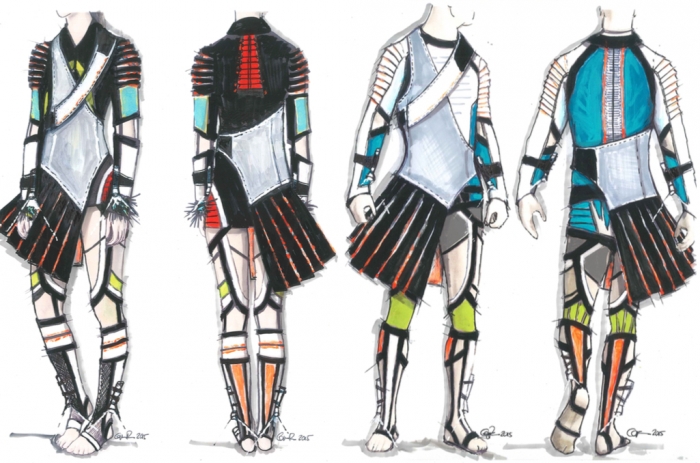 Royal Caribbean International’s newest cruise ship, Harmony... of the Seas that debuts in May 2016, will premiere original aqua show “The Fine Line.” The high-energy, adrenaline-pumping performance in the AquaTheater will have guests at the edge of their seats, witnessing high-flying feats, mind blowing stunts and physically demanding acrobatics.
Show Less