MIAMI, March 22, 2017 – Royal Caribbean International invites travelers to come seek Europe like never before with its 2018 European deployment, headlined by the fleet’s newest ship Symphony of the Seas  Ì¶  the world’s largest and most adventure-filled cruise ship.  The global cruise line also will introduce a brand new port-of-call for the 2018 summer season: Holyhead on the Isle of Anglesey, Wales, where the combination of peaks, lakes and waterfalls will capture guests’ adventurous spirit. Destinations returning to European itineraries in 2018 after a brief hiatus include: Flam, Molde, and Skjolden in Norway and Isafjordur, Iceland.  Across the continent, adventure awaits guests onboard eight of the world’s most innovative ships, with Spanish landmarks, Italian landscapes, French icons, Greek legends and Nordic Castles, comprising an unbelievable collection of more than 110 European odysseys.  All itineraries are available to book as of March 23, 2017; Crown & Anchor Society loyalty members are invited to book one day early by calling their travel agent or (800) ROYAL-CARIBBEAN.

Making her debut in Barcelona, Spain in April 2018, Symphony of the Seas, the fourth sister ship in the Oasis-class, will spend her inaugural summer season sailing the striking blue waters of the Western Mediterranean. Starting April 21, she will offer seven-night itineraries from Barcelona to Palma de Mallorca, Spain; Provence, France; Florence/Pisa, Rome and Naples/Capri, Italy, where travelers can discover the breathtaking views from atop Barcelona’s La Sagrada Familia Cathedral, and revel in the artwork of the old masters housed within the museums of Florence. For those wishing to start and end their trip in Italy, round-trip sailings from Rome are also available.

New in 2018, Vision of the Seas will join Symphony for the season offering 12-night sailings from Barcelona with ports-of-call in Rome, Italy; Nice, France; Santorini and Athens, Greece. In Northern Europe, Brilliance of the Seas will sail new 12-night itineraries from Amsterdam visiting countries throughout the Baltics, Norway and the British Isles, including Holyhead, Wales.

Italian Adventures from Venice and Rome

Royal Caribbean International is an award-winning global cruise brand with a 48-year legacy of innovation and introducing industry “firsts” never before seen at sea. The cruise line features an expansive and unmatched array of features and amenities only found on Royal Caribbean including, jaw-dropping, Broadway-style entertainment and industry-acclaimed programming that appeals to families and adventurous vacationers alike. Onboard, guests are catered to with the cruise line’s world-renowned friendly and engaging Gold Anchor Service by every staff and crew member. Royal Caribbean has been voted “Best Cruise Line Overall” for 14 consecutive years in the Travel Weekly Readers Choice Awards. 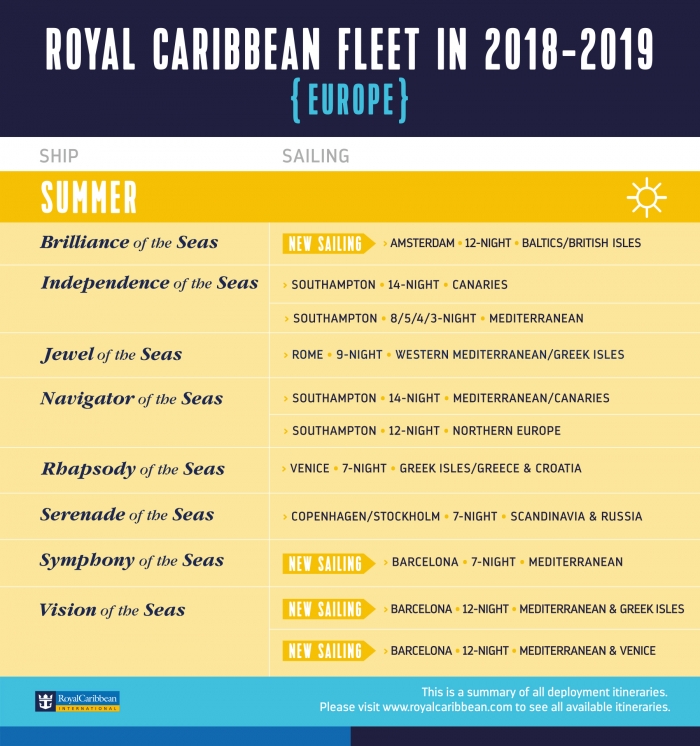 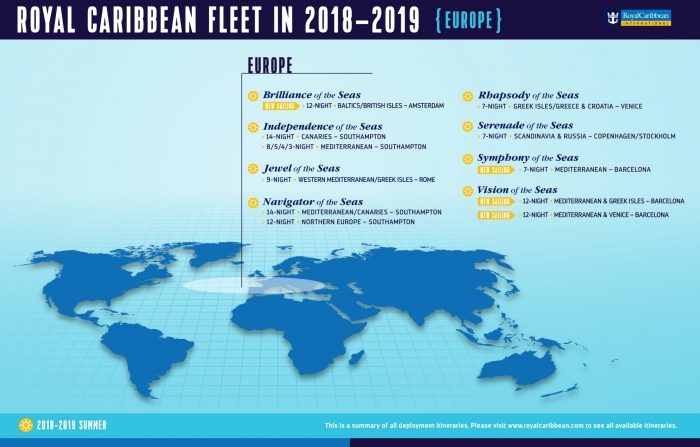