SINGAPORE, January 22, 2018 – Royal Caribbean International today reached a new milestone by welcoming its millionth guest sailing from Singapore – a momentous way to kick start 2018 which is its 11th year of operation in Asia.

Mr Wong can look forward to a free cruise holiday for him and his sibling in his stateroom for his current 4-night Penang & Phuket Cruise sponsored by Royal Caribbean, plus VIP treatment for both. In addition, the cruise line is treating both of them to onboard credit of US$300 which they can spend on for instance specialty dining, shore excursions, shopping and even the special behind-the-scenes tour. Mr Wong also receives a cruise certificate worth US$1,000 for his next cruise holiday.

“This definitely made my holiday knowing that I’m the millionth guest for Royal Caribbean! This is my first time with Royal Caribbean, but never dreamt of winning something like this. My sister wanted a different holiday experience for the whole family, and I’m really excited about my prize that I’m sharing with my family with me here,” said Mr Wong, who is travelling with his family of eight for a vacation.

Mr Treacy said, “We have been looking forward to this day to welcome our millionth guest and thanking him in a big ‘Royal’ way. Crossing this milestone in a span of 10 years here represents a true achievement for us, and this would not have been possible without the strong support of all our guests and key stakeholders including the Singapore Tourism Board and Changi Airport Group which partner us on fly-cruise marketing, as well as the two cruise terminals in Singapore.

“We are happy that more and more people are cruising with us as we bring more and larger ships to Singapore and the region over the last decade, growing from a 2,000-guest ship 10 years ago to three ships double the size today. They include our newest Quantum Class ship Ovation of the Seas and Voyager of the Seas which will be back for more sailings later this year. We hope to continue making Royal Caribbean International a top vacation choice in Asia – and that we can expect our next millionth guest very soon.”

About Royal Caribbean International
Royal Caribbean International is an award-winning global cruise brand with a 49-year legacy of innovation and introducing industry “firsts” never before seen at sea.  The cruise line features an expansive and unmatched array of features and amenities only found on Royal Caribbean including, jaw-dropping, Broadway-style entertainment and industry-acclaimed programming that appeals to families and adventurous vacationers alike. Onboard, guests are catered to with the cruise line’s world-renowned friendly and engaging Gold Anchor Service by every staff and crew member. Royal Caribbean has been voted “Best Cruise Line Overall” for 14 consecutive years in the Travel Weekly Readers Choice Awards and named the “Best Cruise Operator” for 10 consecutive years at the TTG Travel Awards as well as “Best Cruise Line” at the Travel Weekly Asia’s Reader’s Choice Awards since 2015.

The cruise line sails 24 of the world’s most innovative cruise ships to the most popular destinations in Bermuda and the Caribbean, Europe, Canada and New England, Alaska, South America, Asia, and Australia and New Zealand. 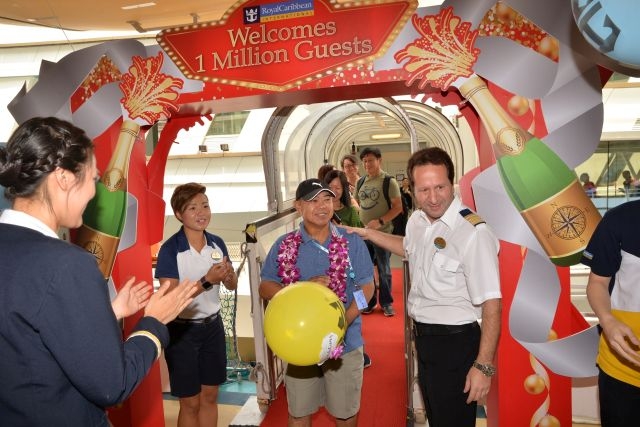 January 22, 2018 – Royal Caribbean International today reached a new milestone by welcoming its millionth guest sailing from Singapore – a momentous way to kick start 2018 which is its 11th year of operation in Asia. 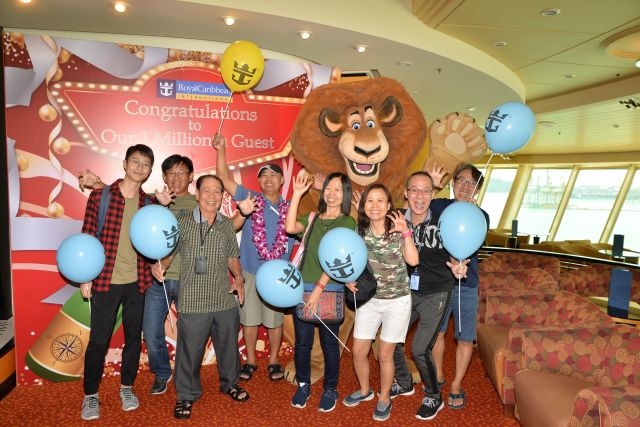 January 22, 2018 – Royal Caribbean International today reached a new milestone by welcoming its millionth guest sailing from Singapore – a momentous way to kick start 2018 which is its 11th year of operation in Asia.
Health and safety protocols, guest conduct rules, and regional travel restrictions vary by ship and destination, and are subject to change without notice. Due to evolving health protocols, imagery and messaging may not accurately reflect onboard and destination experiences, offerings, features, or itineraries. These may not be available during your voyage, may vary by ship and destination, and may be subject to change without notice.