MIAMI, Oct. 15, 2018 – Royal Caribbean International’s Symphony of the Seas, the world’s largest cruise ship, will bring a new sound of adventure to South Florida when she makes her North America debut on Nov. 9, 2018. Ahead of the ship’s highly anticipated arrival to her new home in Miami, FL, the global cruise line is partnering with the GRAMMY Museum® – the official foundation of the Recording Academy™ – to fund music education programs in underserved high schools within the Miami-Dade County Public School District. Twenty local schools will receive grants from Royal Caribbean through the GRAMMY Museum® Signature Schools program, and the chance to perform at Symphony’s naming ceremony, a momentous occasion and maritime tradition.

The 20 schools were selected for maintaining thriving music programs with only limited resources. As the first Signature Schools program dedicated to Miami-Dade County Public Schools, Royal Caribbean and the GRAMMY Museum is taking music education beyond the classroom to inspire the next generation of performers with firsthand, career-building experiences.

Each school will be honored during an exclusive tour behind the scenes at the Royal Caribbean Entertainment Studios on Florida International University’s Biscayne Bay campus, complete with hands-on introductions to what a career in music and entertainment could look like. Students will spend a day at the 132,500-square-foot, state-of-the-art facility, which features a 300-seat theater, a 20,000-square-foot, costume-making facility, 14 dance studios, 15 vocal rehearsal rooms, an audio recording studio, two aerial training studios, and more. Further spotlighting the arts and flourishing talent in South Florida, one student ensemble will be invited to perform on a global stage at the official naming ceremony of Symphony of the Seas on Nov. 15 at Royal Caribbean’s new state-of-the-art Terminal A.

“There is a reason behind choosing the name Symphony of the Seas; it’s because music, entertainment and family are woven throughout every aspect of the onboard experience of our guests’,” said Michael Bayley, President and CEO, Royal Caribbean International. “We have great pride in being a Miami-based company for nearly 50 years. Welcoming Symphony to our hometown is a special occasion, and it is important for us that we celebrate her arrival by giving back to our community in a meaningful way. In working with the GRAMMY Museum, we are helping inspire these incredible, young performers to continue pursuing their passion and show them the variety of career opportunities that exist.”

Arthur and Polly Mays Conservatory of the Arts

“The GRAMMY Museum Signature Schools program is a great source of pride for our Foundation based on what it has brought to classrooms around the country,” said Michael Sticka, Executive Director, GRAMMY Museum. “We thank Royal Caribbean International for their commitment to ensuring that these 20 selected schools will not only receive much-needed funds to increase the access to music education, but that these next generation of artists have adequate funding to fulfill their dreams.”

Royal Caribbean has long been an industry leader, offering unmatched entertainment across its fleet of 25 ships. The global cruise line is known for pushing the boundaries of what’s possible with cutting-edge productions on stage, in the air, under water and on ice. When guests vacation on Symphony, they can enjoy a show-stopping lineup of high-tech, high-energy productions, including Tony Award-winning musical “Hairspray,” with new choreography and staging; and a new original production called “Flight: Dare to Dream,” a celebration of the evolution of air travel that ends with homage to the famed Wright Brothers. In the iconic AquaTheater, an open-air amphitheater, a new aqua show, “HiRO,” offers serious wow factor with high-diving and acrobatics. A high-tech, ice-skating show in Studio B, “1977” will bring guests to London on the eve of the Queen’s Silver Jubilee when her Crown Jewels are stolen in the heist of the century.

Symphony of the Seas will sail into her new year-round homeport in Miami on Nov. 9, following her inaugural summer season in Europe. The arrival of the ultimate family vacation will be a momentous occasion being the first Oasis Class ship to sail from the cruise capital of the world. The ship’s 7-night Eastern and Western Caribbean cruises will feature visits to Perfect Day at CocoCay, the cruise line’s newly revealed private island destination in The Bahamas. For more information about Symphony, visit RoyalCaribbean.com/SymphonyoftheSeas.

About Royal Caribbean International
Royal Caribbean International is an award-winning global cruise brand with a 49-year legacy of innovation and introducing industry “firsts” never before seen at sea. The cruise line features an expansive and unmatched array of features and amenities only found on Royal Caribbean, including jaw-dropping, state-of-the-art entertainment and industry-acclaimed programming that appeals to families and adventurous vacationers alike. On board, guests are catered to with the cruise line’s world-renowned friendly and engaging service by every staff and crew member. Royal Caribbean has been voted “Best Cruise Line Overall” for 15 consecutive years in the Travel Weekly Readers’ Choice Awards.

The cruise line sails 25 of the world’s most innovative cruise ships to the most popular destinations in Bermuda and the Caribbean, Europe, Canada and New England, Alaska, South America, Asia, and Australia and New Zealand. Media can stay up-to-date by following @RoyalCaribPR on Twitter, and visiting RoyalCaribbeanPressCenter.com. For additional information or to make reservations, vacationers should call their travel agent; visit RoyalCaribbean.com; or call (800) ROYAL-CARIBBEAN.

About GRAMMY Museum®
Established in 2008 as a partnership between the Recording Academy and AEG, the GRAMMY Museum is a non-profit organization dedicated to cultivating a greater understanding of the history and significance of music. Paying tribute to our collective musical heritage, the Museum explores and celebrates all aspects of the art form—from the technology of the recording process to the legends who've made lasting marks on our cultural identity. In 2017, the Museum integrated with its sister organization, the GRAMMY Foundation, to broaden the reach of its music education and preservation initiatives. As a unified organization, today, the GRAMMY Museum fulfills its mission of making music a valued and indelible part of our society through exhibits, education, grants, and public programming. For more information, visit www.grammymuseum.org, "like" the GRAMMY Museum on Facebook, and follow @GRAMMYMuseum on Twitter and Instagram. 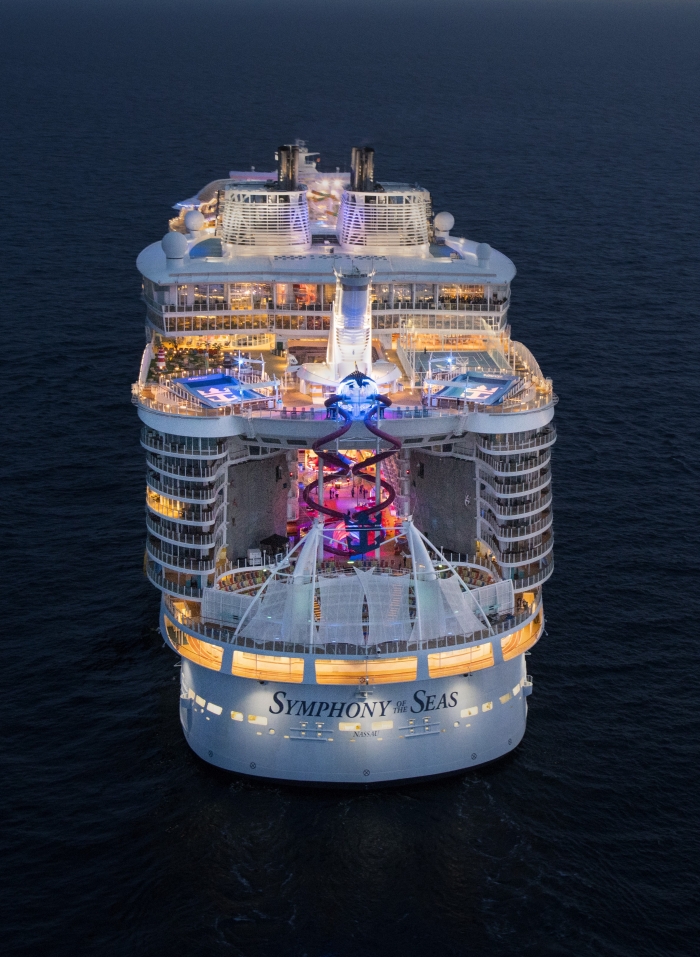 Aerial of Symphony of the Seas 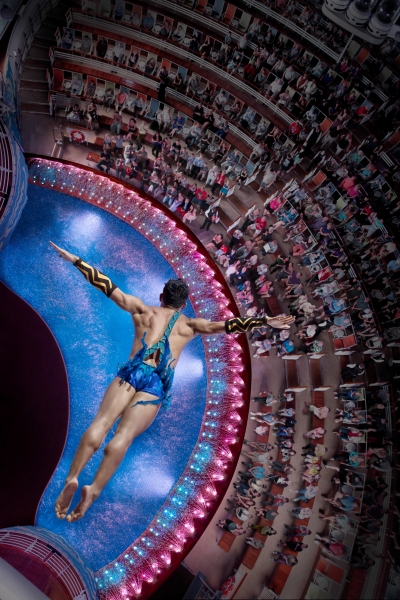 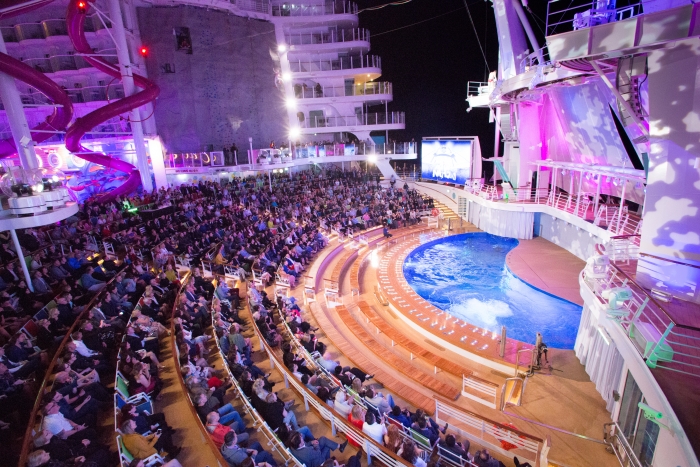 AquaNation Show onboard Symphony of the Seas 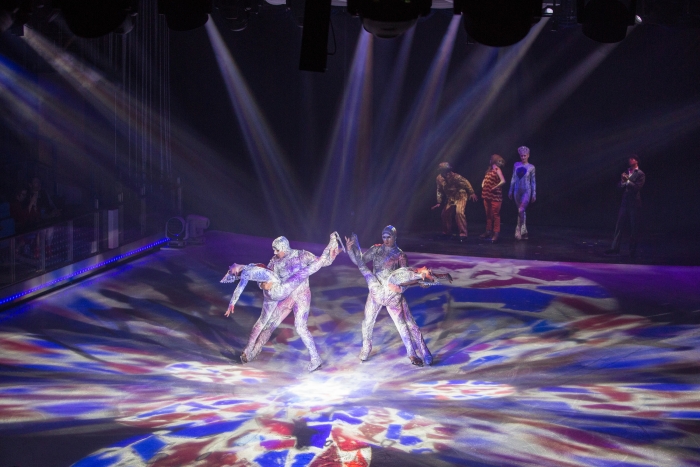 1977 Ice Show onboard Symphony of the Seas 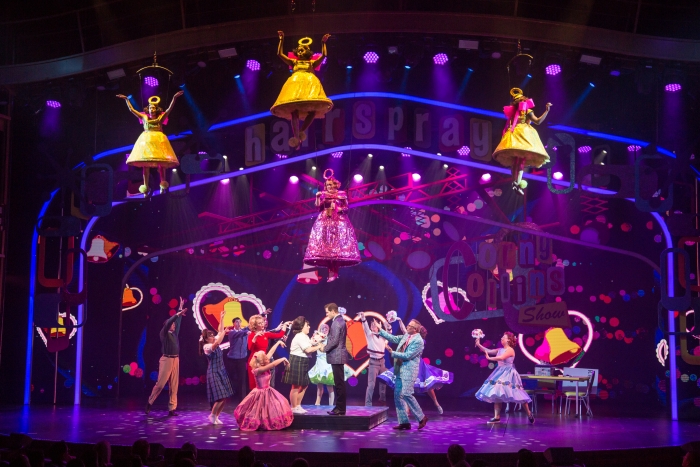 Hairspray onboard Symphony of the Seas