MIAMI, Nov. 20, 2018 – Royal Caribbean International continues to push the boundaries of what’s possible in entertainment with the debut of cutting-edge productions on stage, in the air, under water and on ice on board Symphony of the Seas. Headlining the playbill is the all-new show ‘Flight: Dare to Dream,’ a one-of-a-kind journey through the past, present and future of air travel and space exploration that makes history as one of the most ambitious stage productions to date. Guests take off on a spectacular adventure through time, chronicling key milestones in aeronautics, beginning with the first leisure voyage to Mars and ending with a stunning homage to the Wright Brothers’ first flight at Kitty Hawk.

A Royal Caribbean Productions original, ‘Flight: Dare to Dream’ introduces cutting-edge 3D flying technology, video and automation to the 1,401-seat Royal Theater. Going where no stage has gone before, space and zero gravity is simulated as actors “float” within a detailed replica of the International Space Station (ISS). The first theater set piece of its kind, the detailed design of Royal Caribbean’s ISS was informed by Astronaut Clayton C. Anderson, who lived 167 days in space and completed 38 hours and 28 minutes over 6 spacewalks in two separate missions. Coinciding with the 20th anniversary of the first launch of the ISS into space, Royal Caribbean shares a behind-the-scenes look into the making of ‘Flight.’

Royal Caribbean Productions is the first team to consult with an astronaut that lived in space for a live theatrical production. Complex, high-impact choreography and production also take form in 3D flying with a custom-built recreation of the Wright Flyer that takes off into the house; the set piece has a 22-foot wingspan and single-seat “cockpit.”

“We continue to push the envelope with high-tech, immersive entertainment at Royal Caribbean, and we couldn’t be prouder of how ‘Flight: Dare to Dream’ has brought to life the awe and wonder of flying,” said Nick Weir, Vice President, Entertainment, Royal Caribbean International. “Guests from 5 to 95 years old will not believe their eyes, as all our shows onboard Symphony of the Seas capture their imagination and create jaw-dropping I-can’t-believe-that-just-happened moments they won’t soon forget.”

Symphony of the Seas made her North America debut on Nov. 9, 2018, sailing into her new homeport in Miami, Fla.  Beginning Nov. 17, the adventure-packed ship sails 7-night Eastern and Western Caribbean voyages from the state-of-the-art new Terminal A at PortMiami.

Symphony combines the iconic seven-neighborhood concept that sister ships Harmony, Oasis and Allure of the Seas are known for, with some of the most modern and groundbreaking amenities and offerings that appeal to guests of all ages. For more information about Symphony, the new sound of adventure, visit: RoyalCaribbeanPressCenter.com/Symphony

About Astronaut Clayton C. Anderson
Succeeding in one of the most difficult and coveted jobs in the world through perseverance and a never-give-up mantra, Anderson employs NASA’s “Plan, Train and Fly (Execute)” philosophy to all his speaking engagements and projects.  Coupled with lessons learned in the areas of leadership, persistence, and passion, he provides unique and “out of this world” insights for those seeking to achieve practical execution.

Clay’s AWARD WINNING book, The Ordinary Spaceman: From Boyhood Dreams to Astronaut, children's books A is for Astronaut: Blasting Through the Alphabet and It's a Question of Space: An Ordinary Astronaut's Answers to Sometimes Extraordinary Questions and a special "Astronaut Edition" Fisher Space Pen are available at www.AstroClay.com. For speaking events please reach out at www.AstronautClayAnderson.com and follow Clay on Twitter, Facebook, and Instagram, using @Astro_Clay  #WeBelieveInAstronauts 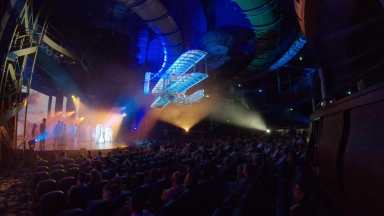